Congratulations to the 2014 winners of the Formula Classic Handicap Championship. It looks like the three of them took out all of the competitions, rightly so as Brian and Lance were the only drivers to competed in every round and Michael was in all but one and that was due to a mechanical breakdown. A big thank you to Dick Ward for presenting the group with a fantastic perpetual trophy which will have Brian’s name engraved upon it as the first winner. 2014 Formula Classic Handicap Championship 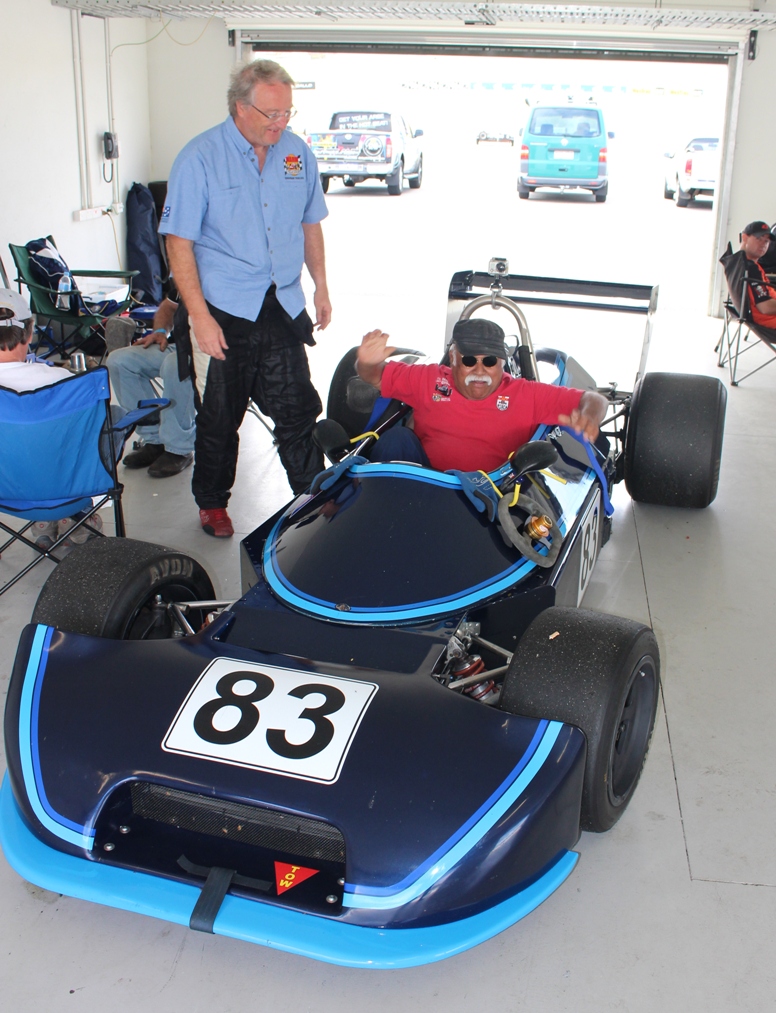 Shannon’s WA All Historic – 25th-26th October 2014 Well what a fantastic event. A big thank you to everyone for making a huge effort to get 45 entries in (enough for three fields of cars), including all of our international and eastern states visitors who left with very fond memories of this event, the competitors in it and the WA hospitality provided. The weekend saw some drivers and cars not seen on the track for quite a while plus a new addition, Andrew Nielson and his West, joined us for the first time. The racing in all three groups was very good with clusters of cars competing against each other throughout the fields, none more so than the lead group of four cars in the Formula Junior class, with a second covering them in all the races keeping the crowd and commentators very excited – and I am sure the drivers involved were as well. There was considerable activity in the infield garages with many a mechanic piecing back together cars that thought five races was a few too many. An unfortunate oil slick after Andrew Bryson’s new motor said “Enough” led to a massive off in the group1 race and also led to off’s in the group 2 race. The weather was very kind to us putting off any rain until after racing was finished for the day but by the end of it all I didn’t see any unhappy people, smiles were everywhere, so well done all on supporting a great event. A special thanks to Martin Bullock (Densford Civil) for digging deep and financially supporting the event and associated activities, also to Neil McCrudden and the WARM museum for not only accommodating some of our visitors but providing cars to anyone who needed one – there were 9 WARM cars running and 1 spare. A thank you to Brian & Anne Searle for also accommodating some visitors and putting on a function for them, to ICL (transport, containers, storage) for sponsoring and arranging the movement of the container for our New Zealand competitors and finally to the WASCC and staff behind the scenes who helped co-ordinate and put on this meeting. Results Round 7 Championship Standings Congratulations to handicap winners on the day: 1st Henry Oosterbaan, 2nd John Rowe & 3rd Alan Ould VSCC Results: See NATSOFT for full results

Spices Cup – 21st September 2014 Once again very low entry numbers for what was a very wet meeting, thanks to those who took the effort to enter. Lance Barrett proved to be a sly old fox positioning his much slower car well up in the points in each race earning him 3rd spot outright (and on handicap) for the day. Results Round 6 Championship Standings Congratulations to handicap winners on the day: 1st Michael Henderson, 2nd Neil McCrudden & 3rd Lance Barrett VSCC Results: See NATSOFT for full results

2014 VSCC Coalfields 500 – 13th-14th September 2014 Although entries were down the VSCC agreed to let our class run at the event which was thoroughly enjoyed by those who entered. Results Round 5 Championship Standings Congratulations to handicap winners on the day: 1st Michael Henderson, 2nd Shane Gifford & 3rd Brian Searles VSCC Results: See NATSOFT for full results

Spring Race Meeting – 10th August 2014 13 Cars for race one with Michael Henderson in the Ralt getting a different view of the grid, by starting from the rear following starter motor issues in qualifying. Michael’s ails didn’t end there, however, as after making his way to the lead loose wiring caused him to DNF on the first lap resulting in a safety car for a couple of laps. The door was now open to the others to grab outright points and Shane Gifford took the win with a very respectable 58.85 second lap from Leon Magistro and Lance Carwardine 3rd. Martin Bullock finished 2nd on the track but suffered a 60 sec penalty after creeping forward at the start. Race two saw Michael winning from the rear of the grid from a quick Shane Gifford and Martin Bullock, also starting from the rear. Leon Magistro’s drive shaft failed on his Ralt on lap 6 taking him out of the days competition. With Martin Bullock pulling out with oil pressure issues and Leon’s driveshaft failure only 11 starters where left for race three. David Watkins had clutch failure during the race causing him to retire after some dices with Neil McCrudden in the earlier events. The safety car interrupted the event again closing the field up, this lead to some close racing mid-field between Brian Seales, Harvey Leys, Glen Swarbrick and Colin McKee. Michael Henderson finished out front from Shane Gifford and Lance Carwardine. The two safety cars during the day played into the hands of the slower cars for handicap points with both Bruce Edgar in his Elfin Formula Junior, Glen Swarbrick in the WARM Macon and Jim Ridgewell in the Van Diemen picking up valuable points in the series. Lance Carwardine however did enough to extend his lead at the head of the championship. It was good to have Andrew Gifford able to attend the meeting, even if only as an observer, hopefully looking forward to getting back in the seat to better his brother’s time soon. Thanks to Michael for enabling the inaugural Formula Classic Creche after his corporate box was filled will children from within the group.   Results Round 4 Championship Standings Congratulations to handicap winners on the day: 1st Bruce Edgar, 2nd Glen Swarbrick & 3rd Jim Ridgewell WASCC Results: See NATSOFT for full results

96fm Keeping Real Music Alive – 12th July 2014 The day started with only 12 cars including John Rowe in his lovely Cooper T45. Issues in qualifying with a few of cars saw numbers drop to race 1 leaving only 9 starters. A loose spark plug saw the end of Simon Barrett’s day and a coming together between Michael Henderson and Henry Oosterbaan on lap 5 saw them out of race 1 as well. Lance Carwardine led Neil McCrudden home to the flag. Fuel issues for Glenn Swarbrick in race 2 saw another car out of the event with now only 6 finishers for that race. Lance wining from Neil again. Michael, with a lot of help from his crew, did manage to get back on the track by race 3. More fuel issues for Glenn left only 7 finishers, led by Michael Henderson from Lance in second. Results Round 3 Championship Standings Congratulations to handicap winners on the day: 1st Brian Searles, 2nd Allan Ould & 3rd Harvey Leys WASCC Results: See NATSOFT for full results

Autumn Classic – 27th April 2014 Our first event at Barbagallo for 2014. Unfortunately Neil McCrudden had a big off going into turn 7 during practice, hitting the wall and putting the Macon out of the days racing. Michael Henderson missed his first race for ages with gearbox issues and it showed with the new front row on the grid false starting, twice, in the first event until they and the new course starter got in sync. A couple of off’s in the first event by Kevin Taylor and Henry Oosterbaan, and some car issues for others saw only 9 runners finish of the 13 starters. The minute penalty applied to the first two cars saw Lance Carwardine win the race with a second going to a much improved Brian Searles in his Ralt RT1. After the first race events 2 & 3 were trouble free with great weather leading to very good times by most runners. Martin Bullock in his new Lotus 27 went within 0.04 seconds of breaking the Formula Junior track record – not too bad for his first race on this circuit in the car. Henry Oosterbaan showed the advantage gained by racing in Europe to finally break the 70 second mark with a 69.8 being his fastest ever at Wanneroo in the Alton AR2. Results Round 2 Championship Standings Congratulations to handicap winners on the day: 1st Colin McKee, 2nd Martin Bullock/Shane Gifford. WASCC Results: See NATSOFT for full results

Collie Icebreaker – 22nd February 2014 Our first event for the year was held at the Collie circuit where many a car, and driver, suffered from the summer heat. The relaxed weekend long event was, however, enjoyed by all the competitors with 100+ attending the race/regularity meeting. Saturday evening entertainment was enjoyed by many and much cooler after being moved out onto the grass area. Results Round 1 Championship Standings Congratulations to handicap winners on the day: 1st Michael Henderson, 2nd Lance Carwardine & 3rd Kevin Taylor/Neil McCrudden. VSCC Results: See NATSOFT for full results

The proposed CAMS calendar for 2014 is out and our events are: *check with organisers for car eligibility This is a very full calendar for the year and there should be something there for everyone. All race meetings will count towards the Formula Classic Handicap Series