Formula Classic Racing Inc. has recently been created to provide a formal body to enhance and promote historic open wheel racing and sports car participation in motor sport events and to represent Formula Classic with the controlling body Motorsport Australia (CAMS) and with event promoters WASCC, MSW, VSCC and other interstate and international bodies.

The end of season dinner and prize giving was held on Wednesday 4th December at the Mount Henry Tavern in Como. There was an exceptionally good turn out of 39 guests at the function, the largest group seen for many years. 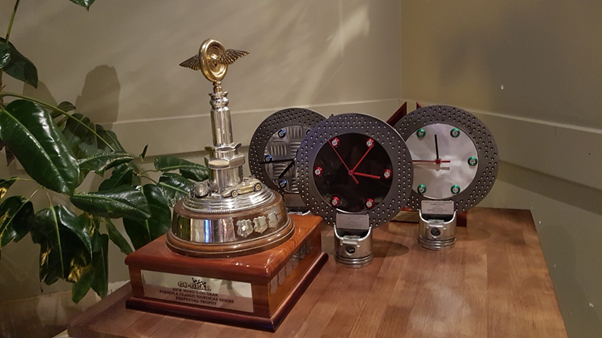 “Spirit of Formula Classic”  winner was deservedly – Murray Charnley This year’s trophies were made and donated by Jamie Kerkhoff and Brian Searles. Full results for 2019 season can be found here and the FCR Newsletter here

2019 Formula Classic – Round 9 Barbagallo Rob Janney Tribute Meeting – 26th / 27th October   The final round of the 2019 Formula classic season was held at Barbagallo, the meeting being dedicated to Rob Janney a life member of the WASCC and substantial contributor to the Wanneroo race circuit and West Australian motorsport. The weekend meeting put a bit of pressure on some of the regular Formula Classic entrants following so closely the previous round at Collie with a few of the usual runners unable to prepare / repair their cars in time. That said, 13 cars entered the event and it was good to see a few new cars and drivers in the field. Russell Sewell, the WASCC President, brought out his big Lola T800 Indy car for the second time this year, Jamie Kirkhoff made his season debut in his Formula Toyota TRD, Bob Creasy ran his newly acquired Ralt RT4 and there were a couple of historic Van Diemen Formula Fords with John Hurney and Ray Stubber and Leone Magistro in his beautifully presented 84 Reynard. Five races over the course of the weekend took its toll on a few of the entrants with some DNS or DNF’s.  The outright positions for the race weekend were; 1st           Michael Henderson                        2nd          Simon Alderson                                                3rd           David Turner                                      Handicap results for the event were; 1st           David Turner 2nd          Russell Sewell 3rd           Craig Thompson With this being the last round for the 2019 season there is a rest period over the summer before the 2020 season kicks off around late February. The end of season awards night will be held towards the end of this year. An invitation to the event will be sent to all members once the venue and date has been arranged.

2019 Formula Classic – Round 7 WASCC August meeting – 18th August   Despite the beautiful winter day only a very small field of cars were entered for the August meeting, 10 in total. The WASCC deemed it appropriate to dock 2 laps from each of the races as ‘punishment’ to the class for providing such a small field of cars. Eight, 6 and 6 being the laps allocated to Formula Classics three events. (I shall comment further on the WASCC decision below) With the recent introduction of unleaded race fuels only it was interesting to note several competitors struggled with starting problems this cold morning, coincidence or just the cold morning air? Hendo missing the qualifying session completely due to a non-starting car. Normal service was resumed quickly however for Michael, despite a rear of the field start in race one. Craig Thompson too started the race day poorly with a spark plug lead coming off in both qualifying and race one, thankfully this was successfully rectified by one of his support team before race two. Harvey Leys pulled the pin on the event after the first race in protest over the shortened event durations. An honourable thing to do but maybe not the best strategy for the group as it left even fewer cars in the field. It was a case of the usual suspects for the outright positions for the race day, the result being exactly the same as the July meeting; 1st           Michael Henderson                        2nd          Simon Alderson                                                3rd           Dave Turner                                       Handicap results for the event were; 1st           Murray Charnley 2nd          David Turner 3rd           Craig Thompson The next round is a little way off at Collie on the weekend of 19th / 20th October but closely followed by the final round for the 2019 season at Barbagallo the immediate following weekend of 26th / 27th October. Not great planning, some may say, having a two month break and then two weekend meetings back to back, but it is what it is. The 2019 season, to date (7 rounds), has not been well supported with an average field of only 11 cars per event. It would be great to see a strong Formula Classic finale to the season at the remaining two rounds. Come on Chaps, let’s put a few more cars on the grid.     Commentary I think the ruling by WASCC to ‘punish’ Formula Classic for providing a small field by reducing the number of racing laps is unfair and wrong. Unfair, as our entry fee is the same as other class entry fees yet we get less laps and wrong, because the people that are being punished are the one that actually entered the event and yet get penalised for something outside their control. That said, I do understand that only so many racing laps can be run in a day and that the WASCC want to get and provide ‘best bang for your buck’ and that 15 to 20 cars on the track at one time is better than only 8 or 10. From my perspective the solution is simple, Formula Classic needs to put more cars on the grid at every race meeting. Not only will this ensure we avoid the unpleasantness of having racing laps taken away from us but ultimately it will give us a ‘loader voice’ with WASCC to get better track terms and conditions for Formula Classic. Over the past five seasons over 50 different cars and drivers have run in Formula Classic events at the Barbagallo and Collie circuits, with most of these cars and drivers still in the State.  Surely we can put on a better show than we have for the earlier part of this season and demonstrate to the WASCC and the viewing public that Formula Classic is a great class and one that’s here to stay.

2019 Formula Classis – Round 6 WASCC July meeting – 14th July Well it was a very different day weatherwise from the last meeting, blue skies and sunshine all day, magnificent, no wet weather tyres required for this meeting! This was the first Formula Classic round to be held under the new CAMS fuel regulation that requires all vehicles to run on unleaded fuel. The WASCC was unable to offer any unleaded race fuel at the time of the meeting so entrants we left to make their own arrangements. Unfortunately Harvey Leys was not able to source any suitable fuel for his Chevron in time and withdrew his entry. A small field of cars 12 cars were entered for the June meeting, it was good to see Rob Jordan and Dave Turner returning to the ranks with their Tiga Sports 2000 and Ralt RT4 respectively. Dave putting on a great showing with a consistent third place in each race. In the dry conditions and with his engine recently set up on the dyno Michael Henderson returned to his number one spot with a magnificent 55 second lap in qualifying and maintained this dominance throughout all three races. Interesting the finishing order for the top six drivers was identical for all three events and with only a couple of minor changes in the lower finishing order too. As with the June meeting the percentage finishing stats were high will all cars, bar one, completing all three races. The prize giving debacle for Formula Classic’s last meeting was resolved and the points tally correctly allocated for this meeting. Outright positions for the weekend were; 1st           Michael Henderson                        2nd          Simon Alderson                                                3rd           Dave Turner                                       Handicap results for the event were; 1st           Craig Thompson 2nd          Leon Majistro 3rd           Rob Jourdan & John Hurney The next round is at Barbagallo on 18th August.

2019 Formula Classis – Round 1 WASCC Golden Jubilee – 2nd / 3rd March The first round of the 2019 Formula Classic season kicked off in glorious fashion at the WASCC Golden Jubileeevent with 17 entries. As usual, the field include a wide range of car ranging from early 60’s through to the early 90’s. It was good to see two new cars joining the class for the first time, notably Andrew Nielsen’s Argo-Toms TRD and Lance Carwardine’s OMS SF/2A. Sadly the OMS didn’t make it beyond qualifying due to an engine oil problem. Similarly the Argo had problems and was retired after race 1. It was also great to see the return of the WASCC president Russell Sewell to the Formula Classic ranks after a sabbatical for a few years with his monstrous Lola T800 Indy car. The rumbling of the V8 motor sounded fantastic as it went along the start / finish straight. Maintaining his 2018 season form, Michael Henderson continued his domination in the opening round of the 2019 season winning all four races; however Simon Alderson and Marty Bullock were snapping at his heels all the while and kept him honest. Harvey Leys was sporting a new vivid green colour scheme on his Tiga SC84, he ran well on day one but unfortunately did not run on the Sunday. Outright results for the weekend were; 1st           Michael Henderson                        100 pts 2nd          Simon Alderson                                78 pts 3rd           Ricky virago                                        68 pts During the off season Kevin Taylor revised the handicapping system to allow the results to be processed on the day, below are the handicap results for this round; 1st           Murray Charnley 2nd          Craig Thompson 3rd           Allan Ould The next round is the Collie Icebreaker over the weekend of 30th / 31st March. Let’s see if we can put out a large group of cars to support this event and the Collie club.

The Formula Classic calendar for 2019 is: